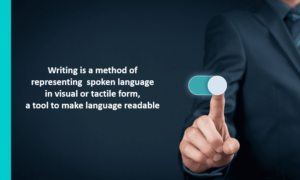 Writing in the context of linguistics – a system of signs, its functions and uses

Writing is a form of human communication that uses within a language system sets of symbols and widely the same structures as speech, such as vocabulary, grammar, and semantics, plus a system of signs for such things as punctuation and numerals. These sets of visible marks are by convention related to some particular structural level of language.

This definition highlights the fact that writing is in principle the representation of language rather than a direct representation of thought, and also the fact that spoken language has a number of levels of structure, including sentences and words, syllables and phonemes, any one of which a writing system can “map onto” or represent. Indeed, the history of writing is in part a matter of the discovery and representation of these structural levels of spoken language in the attempt to construct a general and efficient writing system capable of serving a range of socially valuable functions. Literacy is a matter of competence with a writing system and with the specialised functions which written language serves in a particular society.

Writing as a system of signs
Languages are systems of symbols, while writing is a system for symbolising these symbols. Writing is what renders language visible. While speech is momentary, writing is concrete and, by comparison, permanent. Both speaking and writing depend upon the underlying structures of language. Consequently, writing cannot ordinarily be read by someone not familiar with the linguistic structure behind the oral form of the language. Yet writing is not merely the transcription of speech. Writing frequently involves the use of special forms of language, such as those involved in literary and scientific works which would not be produced orally. Scholars suggest that writing is related directly to language but not necessarily directly to speech. Consequently, spoken and written language may evolve somewhat distinctive forms and functions.

Language has two primary levels of structure, which the French linguist André Martinet referred to as the ‘double articulation’ of language: the meaning structures on one hand, and the sound patterns on the other. Indeed, linguists define grammar as a system for mapping sound and meaning, i.e., establishing a system of relations between these.
Writing systems consequently fall into two large general classes: those that are based on some aspect of meaning structure, such as a word or a morpheme (the basic linguistic unit of the meaning system, with one or more morphemes making up a word), and those that are based on some aspect of the sound system, such as the syllable or the phoneme (the basic linguistic unit of the sound system, being a minimal, contrastive sound unit that distinguishes one utterance from another).
It is generally held that the alphabet is the ideal writing system that represents relatively optimal solutions to a large and unique set of constraints, such as the structure of the language represented and the functions served by the system. Consequently, while there are differences between speaking and writing, and between various forms of writing, these differences vary in effect and in importance from language to language and from society to society.

It is the fact that writing is an expression of language, rather than simply a way of transcribing speech, that gives to writing, and hence to written language and to literacy, its special properties.
Writing is omnipresent in everyday life and fundamental to a modern, literate society.
The benefits and social implications of using written as opposed to oral forms of communication give writing its conceptual significance and supremacy.

The functions of Writing
While literacy is actually not a prerequisite of rationality and civilisation, writing systems were invented to serve better communicative and archival functions. Writing has been observed to quickly and widely displace pre-existing oral traditions.

For a writing system to be communicative, the signs must be conventionalised so that the meaning can be grasped by other readers. Such a system may be restricted to a small set of familiar messages that can be read by a limited circle of acquaintances. However, for a writing system to serve an archival function, it needs more and must be sufficiently conventionalised to permit decoding and interpretation by readers who may know nothing about the writer or the message. It is only with the development of explicit writing systems capable of representing the nuances conveyed in speech that writing can be used both archivally and communicatively.

A writing system, technically referred to as a script or an orthography, consists of a set of visible marks, forms, or structures called characters or graphs that are related to some structure in the linguistic system.
In all of the languages served by AVALON, a character represents a phoneme, and the orthography is called an alphabetic writing system.

The uses of Writing
The invention of devices for representing language is inextricably related to issues of literacy, that is, to issues of who can use the script and what it can be used for. Competence with written language, in both reading and writing, is known as literacy. High levels of literacy are required for using scripts for a wide range of somewhat specialised functions. When a large number of individuals in a society are competent in using written language to serve these functions, the whole society may be referred to as a literate society.

Although the uses of writing reflect a host of social, political and religious factors, and hence are not determined simply by orthography, two dimensions of the script are important in understanding the growth of literacy: learnability and expressive power. Learnability refers to the ease with which the script can be acquired, while the term of expressive power refers to the script’s resources for unambiguously expressing the full range of meanings available in the oral language. These two dimensions are inversely related to each other.

Alphabetic and consonantal writing systems can express essentially all the lexical and grammatical meanings in the language (just not the intonation) and are thus highly suitable for the expression of original meanings. They constitute an ideal medium for legal, scientific, technical and literary texts that must be read in the same way by readers dispersed in both time and space. Some scholars believe that the high degree of literacy in the West is a consequence of the optimality of the alphabet in balancing the two dimensions of learnability and expressive power. It is believed that the rise of literacy and the decline of “orality” in the later Middle Ages were fundamental to the cultural flowering known as the Renaissance.

Writing allows exactly repeatable statements to be circulated widely and preserved. It allows readers to scan a text back and forth and to study, compare, and interpret at their leisure. It allows writers to deliberate over word choice and to construct lists, tables, recipes, and indexes. It fosters an objectified sense of time, a linear conception of space. It separates the message from the author and from the context in which it was written, thereby universalising the meaning of language. It allows the creation of new forms of verbal structure, such as the syllogism, and of numerical structures, such as the multiplication table. When writing becomes a predominant institutional and archival form, it has contributed to the replacement of myth by history and the replacement of magic by scepticism and science. Writing has permitted the development of extensive legal, administrative and accounting systems, based on explicit rules and procedures. Writing has replaced face-to-face governance with written law and depersonalised administrative procedures. Also, it has turned writers from scribes into authors and thereby contributed to the recognition of the importance of the thoughts of individuals and consequently to the development of individualism.

Whereas oral language is learned quite independently of whether it is taught or not, literacy is largely dependent upon teaching. Although, while schooling is critical to the development of literacy, it is not by itself sufficient. It seems common to think of literacy as the simple ability to read and write. Such thinking is in part a consequence of the naive assumption that alphabetic literacy is a matter simply of decoding graphs into sounds and vice versa. In fact, literacy though involves competence in reading, writing, and interpreting texts of various sorts. It involves both skill in decoding and higher levels of comprehension and interpretation. These higher levels depend upon knowledge both of specialised uses of language and of specialised bodies of knowledge.

The result of writing is called text, and we work in the following major categories of Professional Writing. As your wordsmith, we can write well-crafted texts to enhance your communication in all walks of life. 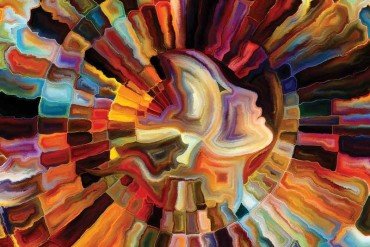 Each of these services is described on its separate page in the following. Please note that all our services descriptions here are only meant as a rough outline.
Upon genuine further interest on your part, we will be happy to provide you with more detailed information and work out a specific proposal tailored to your needs.

GET A FREE CONSULTATION & QUOTE